In this Article, you will learn about the types of Inheritance in Java.

Read more to know each in detail.

Inheritance is a critical feature in which one object acquires the properties of the parent class. It is a crucial aspect of  OOPs (Object Oriented programming systems). Before understanding inheritance, let’s briefly understand Java. Inheritance in Java is the core feature of object-oriented programming. It facilitates a derived class to inherit the features from the parent class, through this hierarchical process the classes share various features, attributes, methods, etc.

Java is a general-purpose programming language that is class-based and object-oriented. Java helps the code developers to quickly write and run the code anywhere without worrying about the computer architecture. It is also known as “Write Once, Run Anywhere(WORA). Once compiled,  the code can run on all platforms without recompilation. The WORA attribute of Java is what makes the Java platform independent, as Java is one of the most highly demanded languages.

Several concepts are there in Java, with four main concepts to get hold of the language. They are abstraction, encapsulation, inheritance, and polymorphism.

As the name suggests, inheritance means inheriting properties.  The mechanism by which a class is allowed to derive the properties of a different class is termed inheritance.  With the concept of inheritance, the information in a program can be organized hierarchically.

Inheritance is one of the critical features of OOPs (Object Oriented Programming System), where a new class is created from an existing class (parent or base class). In simple terms, the inheritance would mean passing down the characteristics of parents(habits, looks, height) to their child.

The most useful contribution of types of inheritance in java would be the reusability of a code. As discussed earlier that the derived class would inherit the feature, methods, etc from the parent class so the codes present in the parent class would also be inherited into the derived class, this is how reusability would work. Different types of inheritance in java are also mentioned in the article.

In Java, the concept of inheritance allows the users to create classes and use the properties of existing classes.

A few important terminologies associated with the concept are:

Implementation of inheritance in Java provides the following benefits:

The basic syntax is

The keyword “extends” is used while inheriting a class. It defines that the functionality of the superclass is being extended to the subclass.

The new class created is called a sub-class while the inherited class is termed a parent class.

Two classes Calculation and My_Calculation are created in the above example. The methods addition() and Subtraction() are inherited from the class calculation into the My_Calculation. Keyword extends has been used for inheriting the methods.

The compilation and execution of the above code give the following output.

The creation of the My_Calculation class copies the contents of the superclass into the sub-class. With the objects of the subclass, the users can access the subclass member.

In certain cases when we have to differentiate between the members of the sub-class to that of the superclass having the same names, the keyword “super” is used. If supposedly we have two classes Sub_class and Super_class having the same method i.e. display(). The implementation of the method is different but has the same name. In such a case, to differentiate between the method superclass from that of the sub-class, the super keyword has to be used.

The different types of inheritance are observed in Java: 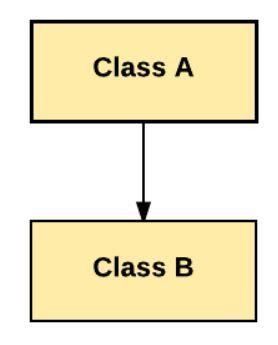 Two classes Class A and Class B are shown in Figure 2, where Class B inherits the properties of Class A.

Example: An example of a code applying single-level inheritance 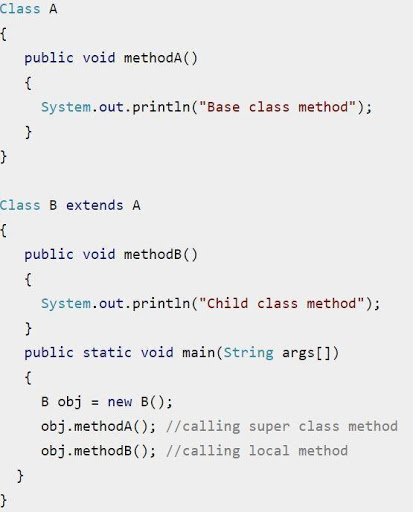 The multi-level inheritance includes the involvement of at least two or more than two classes. One class inherits the features from a parent class and the newly created sub-class becomes the base class for another new class. 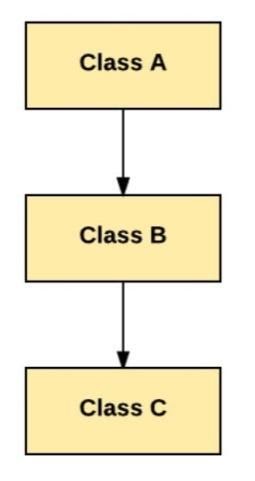 From the flow diagram in Figure 3, we can observe that Class B is a derived class from Class A, and Class C is further derived from Class B. Therefore the concept of grandparent class comes into existence in multi-level inheritance.  However, the members of a grandparent’s class cannot be directly accessed in Java.

Therefore, Figure 3 shows that Class C is inheriting the methods and properties of both Class A and Class B.

An example of multi-level inheritance is shown below with three classes X, Y, and Z. The class Y is derived from class X which further creates class Z.

Example: An example of multi-level inheritance 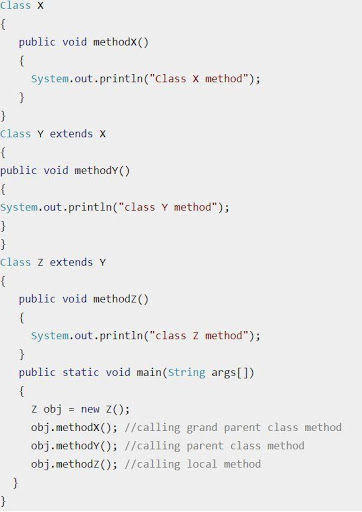 The type of inheritance where many subclasses inherit from one single class is known as Hierarchical Inheritance.

Hierarchical Inheritance a  combination of more than one type of inheritance.

It is different from the multilevel inheritance, as the multiple classes are being derived from one superclass. These newly derived classes inherit the features, methods, etc, from this one superclass. This process facilitates the reusability of a code and dynamic polymorphism (method overriding).

In Figure 4, we can observe that the three classes Class B, Class C, and Class D are inherited from the single Class A. All the child classes have the same parent class in hierarchical inheritance.

Example: An example of code showing the concept of hierarchical inheritance 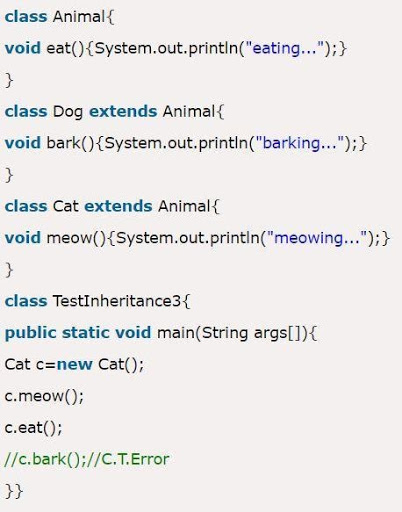 The above code produces the output

Other than these types of inheritance in Java, there are other types known as multiple inheritances and hybrid inheritance. Both types are not supported through classes and can be achieved only through the use of interfaces. 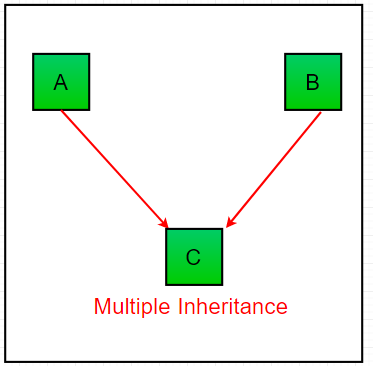 Figure 4 shows that Class C is derived from the two classes Class A and Class B. In other words it can be described that subclass C inherits properties from both Class A and B.

Figure 6: Representation of a hybrid inheritance 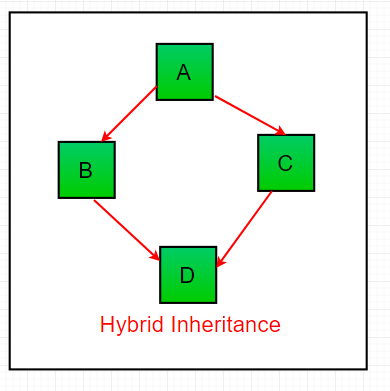 The article discussed the important concept of inheritance in Java and the types of inheritance in Java. Inheritance is therefore the mechanism where we can reuse the codes in order to acquire the properties of a class into another class. This can be achieved through the different types of inheritance patterns as shown in the article. However, there is much more to the concept of inheritance. To excel in the field of development, mastering in the complex programming of Java is required. If you have a dream of innovating intelligent devices, then Executive PG Program in Full-stack Software Development offered by upGrad’s would be the best choice. Certified from the Liverpool John Moores University, the course in association with IIIT Bangalore offers 500+ learning hours and is designed for early professionals. The skill learned from the upGrad’s course will help in opening up opportunities towards the field of software development, web development, javascript developer, etc. Open to any gender within the age group of 21-45, the interactive program might be the best choice for all the coders.

Inheritance is a process by which a new object acquires the properties of the previous object. As an example, you can consider a class 'human'. There may be many properties of humans that you want to include in your class such as height, weight, etc. So, one way to do it is to define all those properties again in your class. It may be a good way to learn object-oriented programming but not a good practice. The best way to do it is to inherit all those properties from a particular class. The class 'child' can inherit all the properties of class 'human' (or 'parent'). This is called inheritance in object-oriented programming.

What is object-oriented programming?

What is multiple inheritance?

What are classes in Java?

A class is a template that is used to define objects. Classes are categories and the objects are the items within each category. Class declarations can include the following components- Modifiers- Determines the scope the accessibility of the classes. For example, private, default, protected, or public. Class keyword- Used to create a class. Class name- A class name should begin with the initial letter. (Capitalised by the norm.) Superclass- Determines the name of the class’s parent, if available. Interfaces- Specifies the behavior of the class. Body- Contains all the code that provides the lifecycle of the objects created from the class. It is put within the curly brackets. {}

What is a parent class?

How is inheritance achieved in Java?

Why multiple inheritance is not supported in java through class?

How does multiple inheritance implement in Java?