Java Do While Loop With Examples

iterations do not have a fixed value, it is recommended to use a do-while loop as it is guaranteed to be executed once. This is possible because the condition is checked post the body of the loop is executed. That is why it is an Exit Control Loop.

The do while loop in java is known as an exit control loop. Thus, unlike “for loop” and “while loop”, the “do-while loop” tests the condition at the loop body’s termination. The do while loop program in java comes in handy when you want to execute a block of statements recurrently.

Do While Java Syntax

//body of the code

If you want to test a sample do while loop program in java, you should first understand its components. Its two components are Test Expression and Update Expression:

Update Expression: After the loop body executes, the Update Expression increments/decrements the loop variable by a certain value. For example, you can use  i– to decrement the i’s value in a do while program in java.

Explanation: The given loop runs six times. Hence, the value of i is 6, but it is not printed as the condition evaluates to false.

How Does a Do-While Loop Execute?

Do While Java Infinite

An infinite loop is created when the Boolean expression is passed as true in the do-while java loop.

System.out.println(“Start Processing inside do while loop”);

// Any other statements can be added

System.out.println(“End Processing of do while loop”); 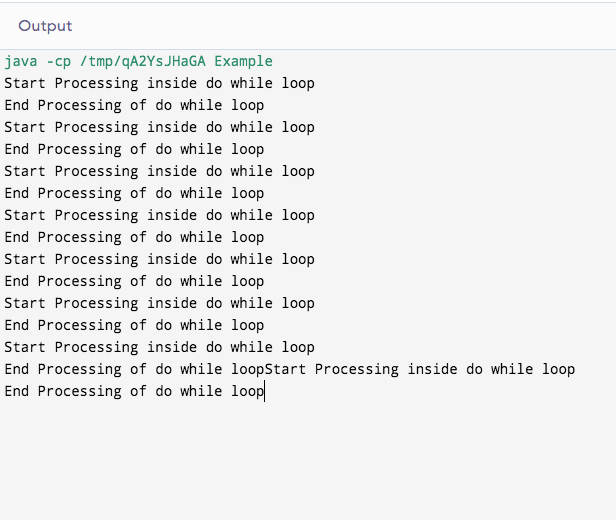 Explanation: The statements keep on being executed till the program is terminated using the IDE.

Sum of Natural Numbers up to a Given Number

do { // The line will be printed even

// if the condition is false

Iteration of Array using Do While Java Loop.

Here’s an example of iteration of an integer array using do-while loop in Java:

It is possible to have a do-while in a do-while Java loop. This is known as nesting of do-while construction. There is no upper bound to the depth of nesting. A do-while can have any construct like if, while, switch, etc., inside it. For example: 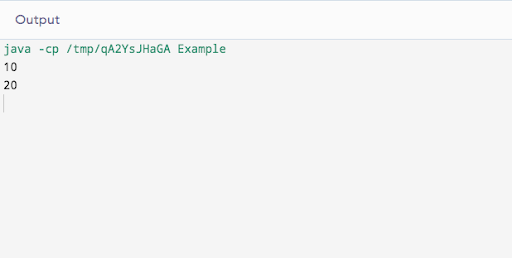 Do While vs While Loop

When you require your program to be executed a minimum once, use do-while. For example, you have to take input from the user until the user enters a negative number. In such a case, a do-while loop is used as the initial input can be positive or negative, but we require input. In all other cases, it is easier to use a while loop.

An Application of the do-while loop in Java:

This example menu helps you to show some menus to the users. Suppose you are developing a game program for demonstrating some options to the user. For example, press ‘1’ for running, press ‘2’ for stopping, and press ‘Q’ to quit the game. In this case, you want to show your game menu to users at least once. Hence, you can write this game code within the do-while loop in Java.

The do-while Java loop is used for iterating a set of statements until a given condition is met. In this blog, you learned about the loop, its syntax, uses, nesting, and comparison with the while loop.

If you are looking to know more about Java and move up in your coding career, explore courses by upGrad – India’s largest online higher education company. Visit upGrad for more information.

What are loops in programming?

In programming, a loop is a segment of code that repeats continuously until a particular condition is met. A loop is a structure in which the sequence of the flow of execution is controlled by a condition. Loops are a programming construct for performing an action repeatedly. This can be anything from displaying a message on the terminal several times to performing a calculation thousands of times. Most programming languages have some form of loops such as for loop, while loops, do-while loops, foreach loops, etc.

What are java functions?

A function is a set of statements that perform a certain task. The task can be to return a value (returning a value is also known as a return value) or to make changes. Functions are used to simplify the code. Functions allow us to break code into maintainable and manageable chunks. They allow us to reuse the code. In Java, there are three types of functions. The first one is the Built-in functions. These are the functions which are provided by the Java. For example: System.out.println(). Java also supports user-defined functions. These are the functions which are written by the programmer.

What are the features of java programming language?

Java has a rich and powerful syntax that is similar to C and C++. It uses C and C++ data types like int, char, float and double. Java is a platform-independent language that can be used to develop programs for any platform. It is a statically typed language. It does automatic memory management in the same way that C and C++ do. It supports multi-threading, networking, databases and graphical user interfaces.