What is Constructor Overloading In C++ : Characteristics and Types

C++ is a commonly used Object-Oriented Programming Language in the industry. C++ is a pioneer programming language in OOP, developed by Bjarne Stroustrup at AT & T Bell Laboratories in the year 1979. The most frequently used feature of c++ could be to create a class in it. Within a class, we can create class members –methods and variables.

In C++, the default constructors are without parameters. They are instantiated from the object members with corresponding default values.

You can have a fair idea of overloading concepts used in Object-Oriented Programming.

A constructor (ctor) is a programming technique used to create an object in class-based object-oriented programming. A new object is created by calling a special-purpose subroutine. It is a member function of a class that, in turn, initializes objects of a class. This method accepts arguments. The supplied parameters are used by the base constructor and set member variables.

Default Constructors – The constructor having nil parameters and no arguments. They are compiler-generated implicit constructors.

Parameterized Constructors are those through which you can pass arguments. The arguments initialize an object that was created. Create a parameterized constructor simply by adding parameters to it, similar we do for any other function. Use the parameters in the constructor’s body to initialize the object. This type of constructor is commonly used for overloading and also for initializing various data elements of objects with different initial values.

Copy Constructor – It is a member function used to initialize an object using another object of the same class. The compiler, by default, creates a copy constructor for each class, following a member-wise copy between objects.

In c++, a constructor is automatically called when an object (that is, the instance of a class) creates it.

If we do not specify a constructor, the c++ compiler generates a default constructor for us (expects no parameters and has the class name).

A properly written constructor leaves the resulting object in a valid state.

Given constructor can be overloaded, similar to the function overloading.

Overloaded constructors follow the same name as that of the class. However, it varies in several arguments. While creating an object, the type of arguments passed determines which constructor is being called.

The availability of multiple constructors with different parameters helps to perform different tasks in programming.

In c++, there are multiple constructors in a class under the same name but a different list of arguments. This concept of constructor overloading in c++  is quite similar to function overloading.

Constructors that firmly create objects using a single class and return a new instance of the class are abstracted by the industry, which creates objects but can do different ways using different classes or different allocation schemes, such as object pools.

How Does Constructor Overloading Works In C++?

Let’s consider the example as shown below: 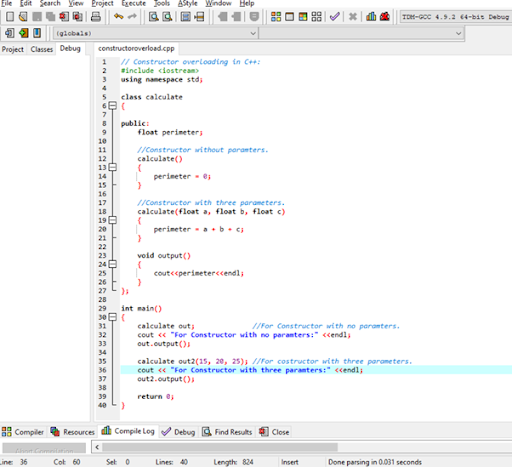 The code illustrated an example of constructor overloading in c++.

There are 2 constructors of class “calculate”:

And in the main() there are two objects created.

When it is created, it will automatically invoke the default constructor with no parameters. This is because while creating an object, there is no parameter passed. So, it matches the definition of first(Default Constructor). This will assign 0 values to all three variables for that object of the main class.

When it is created, it will automatically invoke the constructor with 3 parameters. This is because while creating an object, only 1 parameter is passed. So, it matches the definition of the Second Constructor. This will assign 3 values (passed as parameters) to the variable for that object of the main class.

Understanding the programming concept for constructor overloading in c++ is a significant skill for programmers and system designers. Students in the stream of computer and computing-related programs can enhance their skills and technical credibilities, such as OOP concepts and code optimization. The resources and knowledge base at the upGrad portal encourages such professionals to gain the programming expertise to compete in the industry market. Additionally, you will gain an opportunity to explore professional networking and skill development.

What are constructors in programming?

Constructors in programming are the functions whose main purpose is to initialize the object and perform other simple tasks. Constructors are used for object-oriented programming, which is a popular programming paradigm used. An object-oriented program thus contains objects which in turn have properties, methods and events. To create an object, you must use a constructor and to be able to use the object you must instantiate it.

What is constructor overloading?

How to initialize objects using constructors?

Constructors are crucial when it comes to initialization of your classes. They are a special type of function that is used to create and initialize objects. Sometimes we don't want to create all fields in the class because they are not needed. If we create all fields, we should initialize all fields. In this case, we use default constructor and initialize the fields as we want. When you create a class, you can create one or more constructors inside the class. Thus, when you create objects for that particular class, you can easily call the constructor of that along with the arguments that you want to set. These arguments can be set as the values of the fields or attributes of the class whose constructor is called.