What is Hybrid Inheritance In C++? It’s Types With Examples

We often use the term “Inheritance” in a programming context. It’s a feature practised in programming to make the best reuse of the codes.  If you recall the concept of “IS-A” in OOP (Object Oriented Programming), you will find it’s based on the Inheritance feature. The implementation of inheritances will help you gain advanced project ideas in C++.

In the process of Inheritance, the objects of one class acquire the properties and behaviour of another class. Here a new class is derived from the existing base class.  The member class derived is usually called a child class and the base class member of the parent class. After the child class is derived, it inherits all the properties and methods from the parent class.

Additionally, the child class can have its exclusive properties and methods intended for a purpose. The additional features added locally to an existing class will not affect the properties it inherited from the parent class. Thus, the new class will have combined features of both classes.

Often, in reality, a programmer needs to develop an object that has to:
1)  possess all qualities of its parent, and additionally,
2)  in some aspects, persistence is special.

Coding such exceptional properties in the main class may not necessarily be practical and economical. In that case, a new class is derived by extending the base class. Also, deriving it from another class having additional qualities. In this manner, you can reuse, extend, or modify attributes and behaviours which are defined in other classes. Thus the child class derived from multiple classes gives an object that is easy to maintain and port. The derived class is the specialized class for the base class.

Technically, the keyword “extends” is used to inherit a class. C++ uses the colon (“:”) symbol to inherit from a class.

Here Class B and Class C both are derived from the base class, Class A.

A hierarchical classification of Cars shows two classes. Both “Petrol Cars” and “Electric Cars” are derived from the base Class ‘Cars.

There could be situations where we need to apply two or more types of inheritance combined to design a program. When a program involves more than one type of inheritance, it is called Hybrid Inheritance.

In short, hybrid inheritance is a combination of two or more types of inheritance. For example, by implementing single and multilevel inheritances in the same program. 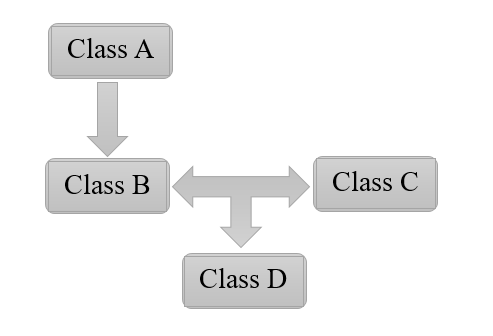 Hybrid inheritance is applicable in the scenarios where we are required to apply more than one inheritance in a program.

Syntax of Hybrid Inheritance In C++

A typical syntax and semantic for hybrid inheritance in C++ will follow as illustrated below: 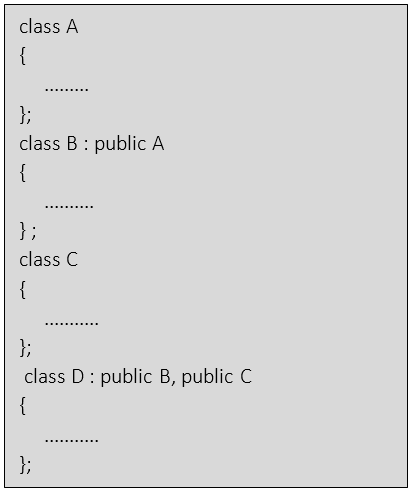 Examples of Hybrid Inheritance In C++

Let’s see how single and multiple inheritances are implemented. 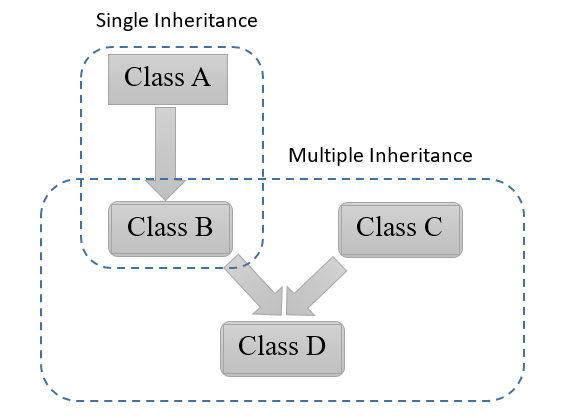 Each block in this diagram represents a class, and the corresponding arrow the inheritance of a class. 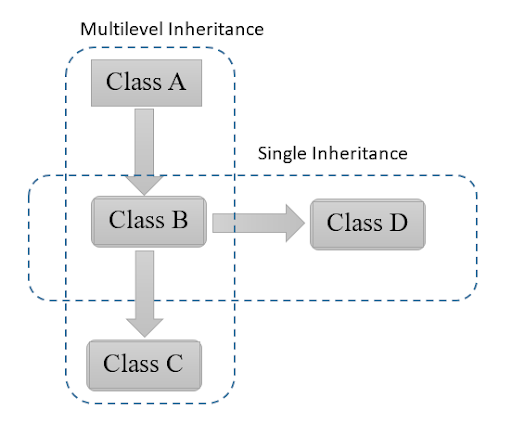 We can also implement other types of inheritance to constitute hybrid inheritances.

We derive a car subclass from the class Vehicle. Another class characterizes Racing. When we derive a final entity, both from the Car class and the Racing class, it will give a combined output. This derivative is Ferrari – the racing car. 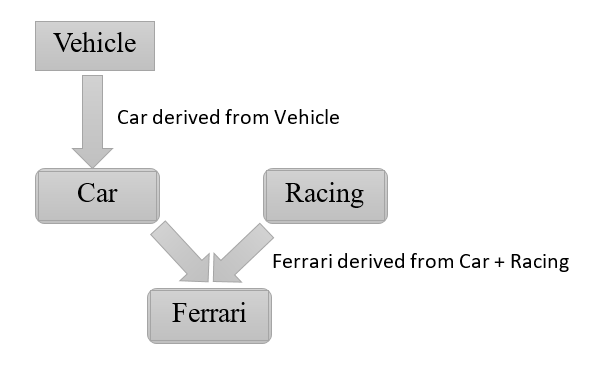 Here is a simple program to illustrate the concept of hybrid inheritance in C++. 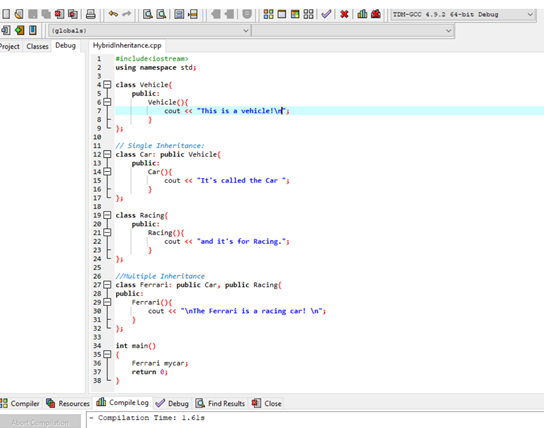 Hope this article helped you to understand the concept and types of Hybrid Inheritance in C++. Students in the stream of computer and computing-related programs can enhance their skills and technical credibility, such as OOP concepts. upGrad provides resources and a knowledge base to encourage such professionals to expertise in programming and compete in the industry market. At upGrad, you also get an opportunity to explore professional networking and skill development.

We hope you will have an excellent learning opportunity in executing these C++ projects. If you are interested to learn more and need mentorship from industry experts, check out upGrad & IIIT Banglore’s Executive PG Program in Full-Stack Software Development.

What is inheritance in object-oriented programming?

Inheritance is a mechanism of reusing code and it helps in simulating the real world. It extends the concept of data abstraction in OOP. It is the process by which a class acquires the properties of another class. It is fundamental in OOP that a class can only be defined in terms of another class. This is because of the concept of abstraction. Inheritance is a mechanism that makes new object classes in the same class hierarchy as other objects. The main benefit of inheritance is code reuse. It is a way of reusing code. If you have a class and it does a particular job, you can use it for another job as well. Just say, a car and a truck do the same work, so you can use the same code to drive them.

What are the 3 scopes of inheritance in C++?

What is multiple inheritance in C++?