What is Assertion in Java?

The following are two ways in which assertion is carried out in Java:

How to Use Assertion in Java?

Assertions are disabled in Java by default. The following command is used to enable them:

where Test is the name of the Java file.

Here is an example to demonstrate the syntax of assertion:

System.out.println(“The age of teenager is ” + value); 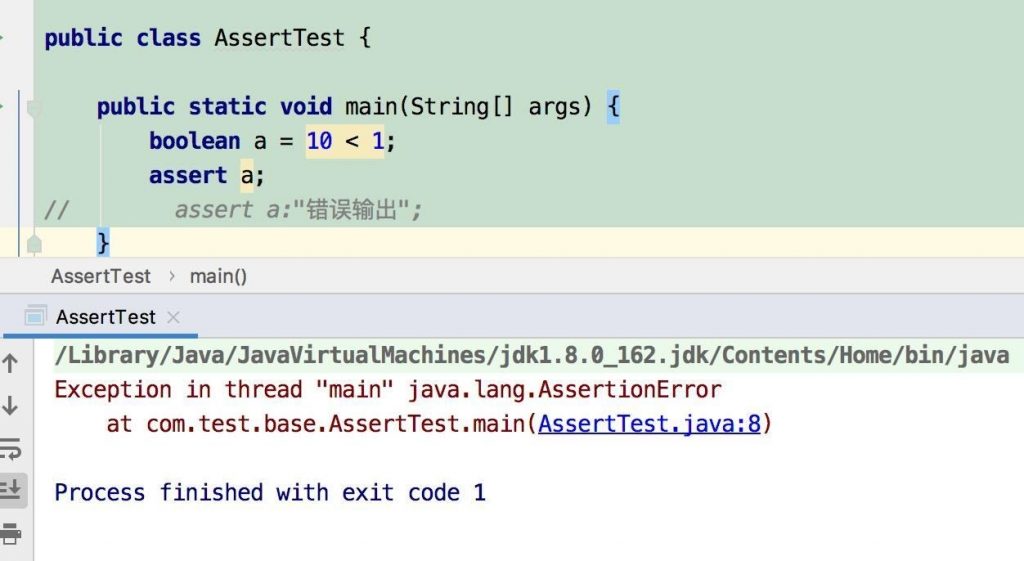 The assertion in Java is used to:

The assertion in Java is used at the beginning of the method and after the method invocation.

Where to use Assertions?

The assertion in Java is used in conditional cases and when conditions are at the beginning of any method. Also, in the case of arguments to private methods. The developer’s code provides private arguments and when the programmer needs to check his/her assumptions regarding the arguments.

Here are some situations in which the use of assertions should be avoided:

How to Disable Assertions?

The following commands are used to disable assertion in Java:

where Test is the name of the Java file.

Ways to use Assertion in Java

The following output is achieved when assertions are disabled and the program has no compilation errors.

When the assertions are enabled, we will get the following output:

There is another form of assertion statement which is as follows:

This form of assertion statement has an expression that is passed to the AssertionError object’s constructor. If the condition is false, this expression has a value displayed as the error’s detail message. To help in debugging the problem, the detailed massaged captures and transmits the assertion failure information.

Exception in thread “main” java.lang.AssertionError: There are only 5 weekends in a week

As shown in the above example, the expression is passed to the AssertionError object’s constructor. As the assertions are enabled and the assumption is false, an appropriate message is displayed when an exception is thrown. The message helps to diagnose and fix the error that caused the failure of the assertion.

In this blog, you have learned how to use assertions to test the program logic. You have also learned why assertions cannot be used as a replacement for exceptions, and you have seen situations where using an exception would be more effective than exception handling.

If you are looking to learn more about Java and move up in your programming career, explore free Java online courses by upGrad, India’s largest online higher education company. Visit upGrad for more information.

What is assertion in Java?

In Java programming language, assertion is a method used for ensuring that some requirements should be followed. The assertion failure in Java is considered as compilation error, i.e. if there are any assertions in your code, the code won't be compiled, and you will get error message. This feature of Java enables you to protect your code from unexpected or unwanted run-time errors. The Java assert statement allows you to test invariants of your program at run time. Assertions are normally used to check that the code is not entering an invalid state. In other languages you may see contract methods or pre/post conditions used for this purpose.

How to handle exceptions in Java?

How does try-catch work in Java?

try-catch is a mechanism in Java that allows you to define a scope in which you can deal with runtime errors in a controlled manner. It also ensures that the flow of execution doesn't stop completely when an error is encountered. try and catch are two keywords used to implement exception handling. Whenever an error occurs in your program, the try block will be executed, and the error will then be handled by the catch block.