How to Create a Custom Directive in AngularJS :Step by Step Explained

The following elements can be used for creating custom directives by angular JS. The activation of a directive is based on the type of a directive.

Registering a Module with that of a Directive

Program for module registering to a directive

A directive() function call has been made in the module. Through this call, a new directive can be registered.

Two properties exist with the returned object; a restrict, and a template field.

The other property i.e. the template field is involved in replacing the contents of the matching div elements.

If the HTML in a HTML page is like this

The activation of the directive that was added will be done when the div element is found out by angular JS.

Binding data meaning is to be known before understanding the concept of angular data binding. With the changes in the value of data, there are automatic changes with the elements that are bound to the data. It can be one-way or can be a two-way process. Angular data binding is of four types; Interpolation, Property Binding, Event Binding, and Two-Way Data Binding.

Read: Difference Between Angular vs AngularJs

Creation of a Custom Directive

A few steps involved in the creation of a custom attribute directive are;

Step1: A directive is created by a class decoration through using @Directive decorator.

Step 3: The directive is to be registered with the module.

Step 4: the directive is to be used.

The example will show the creation of a custom directive in angular JS. A div tag will be injected when the directive is being called.

An example of code for the creation of custom directive 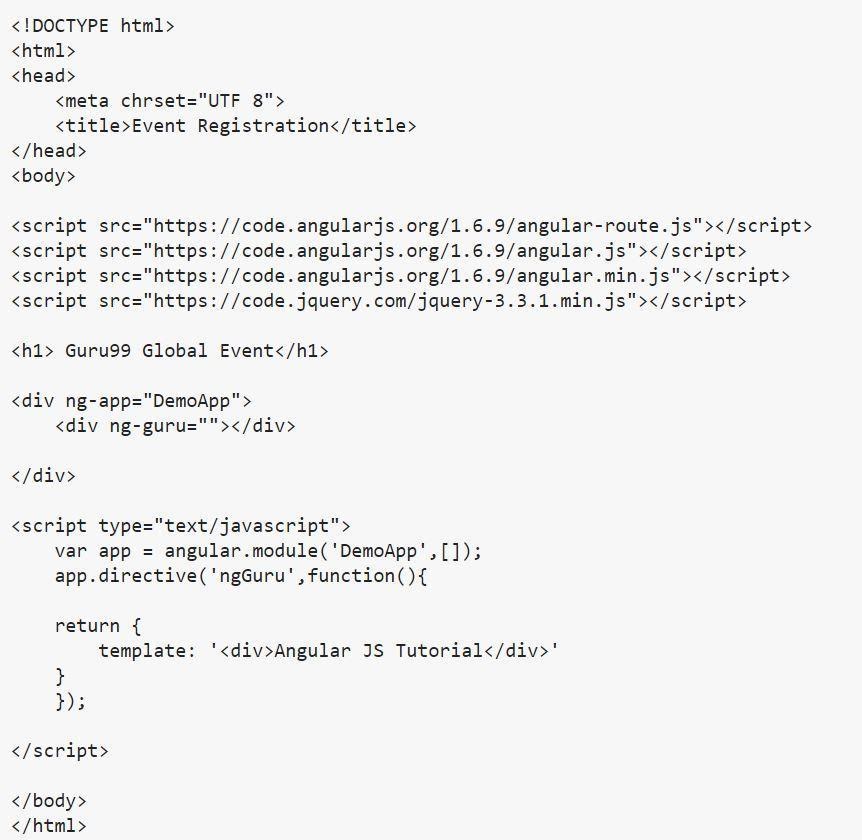 Explanation of the code:

Successful execution of the code will generate the following output.

Output of the code 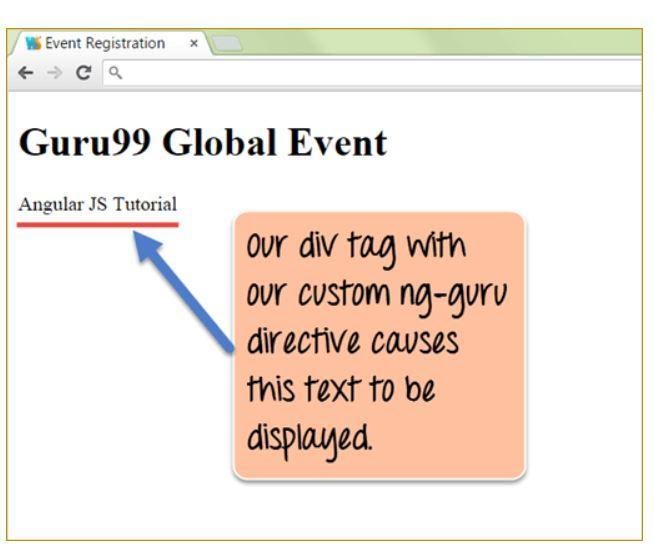 In the output the custom directive i.e. the ng-guru can be seen with the defined template. The template is defined for displaying a custom text. 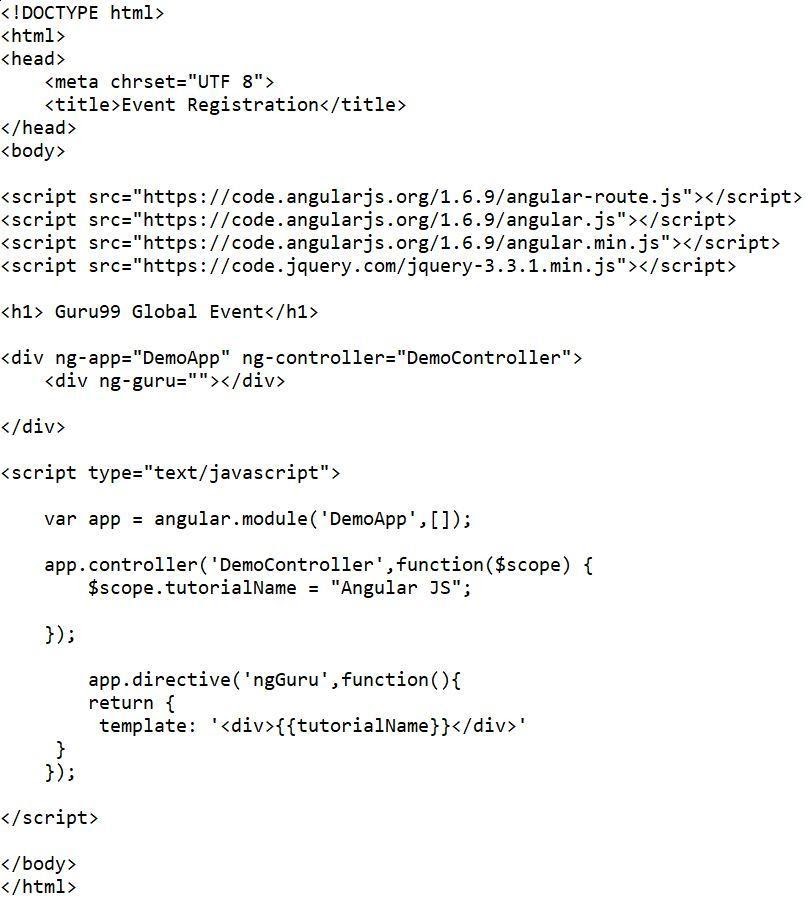 Explanation of the code

‘tutorialName’ is defined in the controller and is attached to the scope. The command used is:

Output of the above code 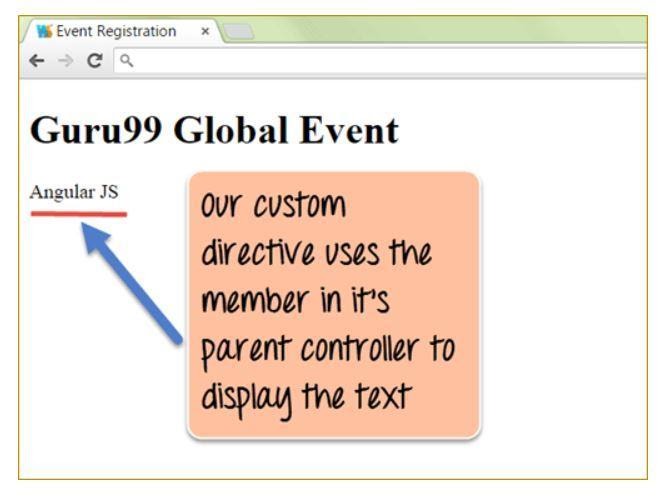 In the output, it can be observed that the tutorialName which is the scope variable is being used by the custom directive which is “ng-guru”.

Event Handling in a Directive

Handling of events such as mouse clicks or the clicks of buttons can be done from within a directive. The link function is used to handle the events. The directive is attached to the elements of the DOM in a page of HTML through the link function.

Three parameters are accepted by the link function; scope, element, and the attributes.

Custom directives in angularjs are used for extending HTML functionality in angular. The creation of this type of custom directive is discussed in the article with an angular custom directive example. Overall a bit of the programming concept has been touched. However, if you desire to be an expert in software development, you should master your skills of programming applied in the software industries. Considering this, you can check the course Executive PG Programme in Software Development – Specialisation in Full Stack Development, offered by upGrad. The 13 months long program is designed for mid-level professionals within 21 to 45 years of age and who are awaiting their luck in the software development sector. With over 16 programming languages and tools, online sessions, and classes from leaders, the course will provide you with placement assurance in top industries. If you are interested, contact our team for further details. We will be at your assistance.

Can we create custom directive in AngularJS?

AngularJS is a powerful JavaScript framework for building single-page web applications. AngularJS is based on the Model-View-Controller (MVC) software architectural pattern. Angular provides the ability to create custom directives. A directive is basically a custom HTML attribute. It is a way to extend HTML vocabulary and modify the behavior of the DOM and your Angular application. There are two ways to create a custom directive in Angular using AfterViewInit and AfterContentInit.

What is the difference between link and compile in AngularJS?

AngularJS provides two methods to apply templates and styles to a view: compile and link. The compile method is called once during application start up before the application itself starts, and the link method is called once the application is started to run the specified section of code. The difference between Link and Compile will vary on the situation. The main point of Link is that it is used to bootstrap AngularJS with a static file, while Compile allow us to change the HTML.

What are the uses of AngularJs?